The Second Annual Congress of Nanoscience and Nanotechnology (CANN) was focused on the recent developments on Nanobiomedicine in the region of Catalonia.

The use of advanced nanomaterials are at the leading edge of the rapidly developing field of nanotechnology and have attracted increasing interest of current researchers globally because of their unique physico-chemical, biological, optical, electrical and magnetic properties. Nanomaterials are under investigation in various areas of biology and medicine that includes proteomic and genomic studies, disease diagnostics, pharmaceutical screening, drug delivery, protein purification, cancer therapies, and bio-imaging. With this event, we wanted to show how nanotechnology is drastically changing the biomedical field, offering a space for researchers working in Catalonia to expose and exchange their work.

We conceived the past 2020 edition through an online format, due to the health crisis issue. 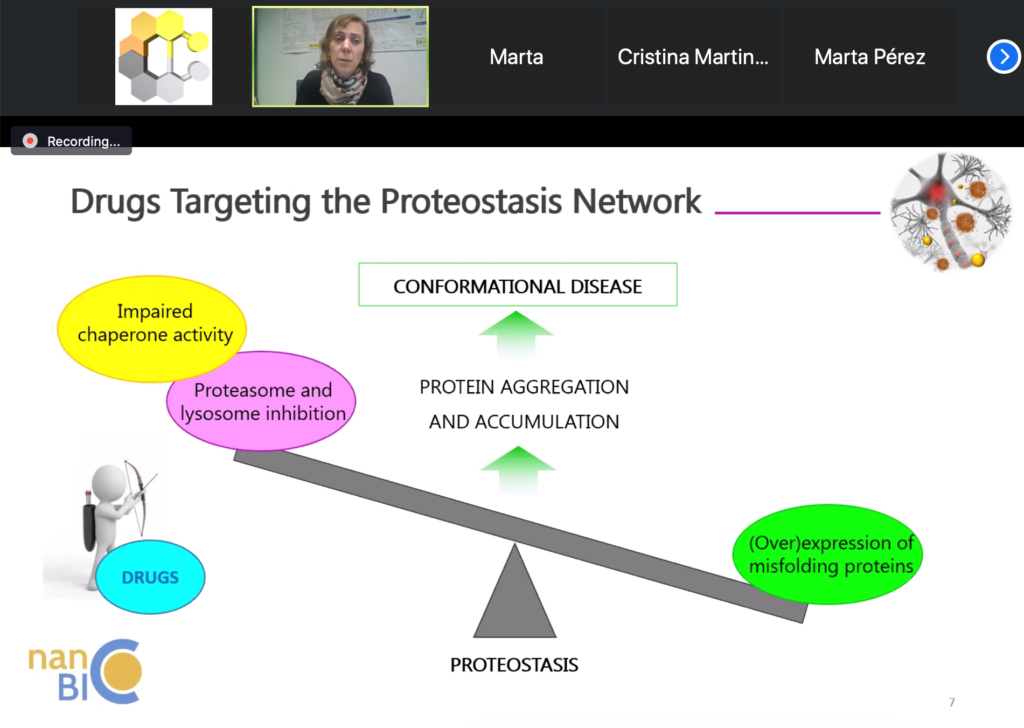 The congress started with invited talks from referent researchers in the region of Catalonia. It was such an honor to have with us Dr. Daniel Closa, the head of the group “Molecular and cellular bases of inflammation. Structural and biological mass spectrometry” at IIBB-CSIC. In his talk, it was exposed how all scientific and technological advances have been accompanied by movements of rejection by some sections of society. Therefore, a rapidly evolving field, such as nanotechnology, has all the chances to become the next target of these kind of movements, and it’s worth thinking about how to respond to them a little in advance.

Later on, we continued the event with Dr. Imma Ratera, a permanent researcher at the Nanomol Department of the Institute of Materials Science of Barcelona (CSIC) since 2008. She presented us a versatile colloidal system based on fluid nanovesicles as a novel template for the hierarchic nanostructuration of RGD peptide, anchoring it on the fluidic vesicle membrane. Such work shows how to combine biological, physical, and chemical inputs in tissue engineering to mimic cellular environments designed to fulfill different biomedical needs.

We also had among us Dr. Elisabeth Engel, the principal investigator of the group of biomaterials for regenerative therapies at IBEC since September 2012. She explained how biomaterials interact with the host environment and no biomaterial is inert, all of them can affect cell behavior. Her team has demonstrated that biomaterials themselves can activate stem cells at their niche and can either differentiate them or dedifferentiate adult cells towards a more precursor phenotype. Such breakthrough is great news for in situ tissue engineering applications. 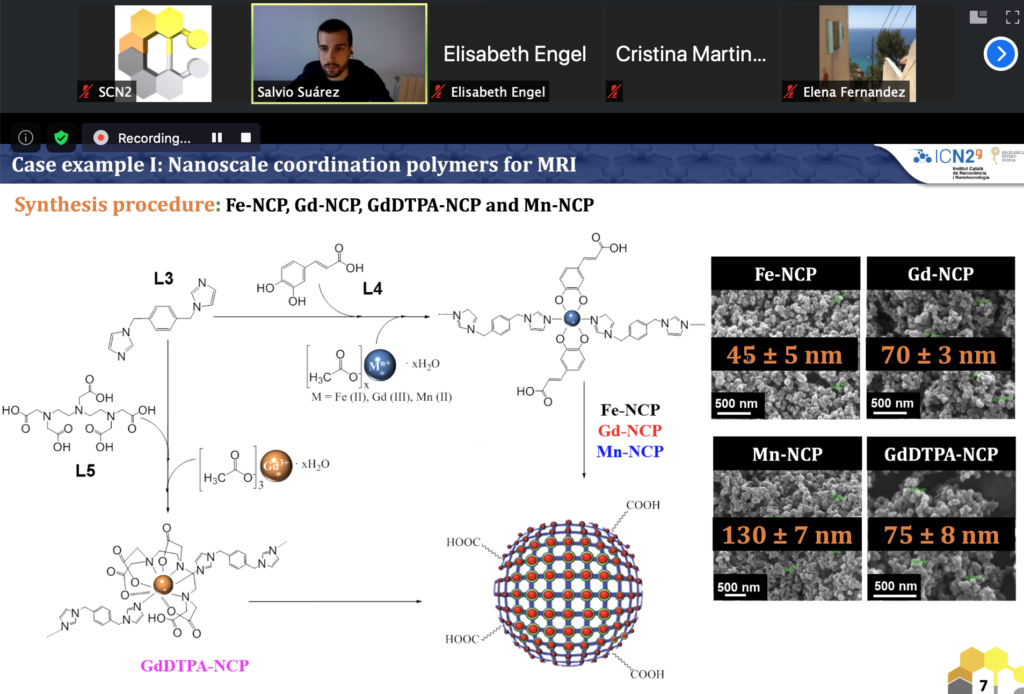 After Elisabeth, we were glad to hear Dr. Salvio Suárez-García. His expertise as a researcher is focused on the development of nanostructured functional materials and polymers (2D materials, coatings, and nanoparticles) for their application in electronics and nanomedicine in the ICN2. The application of coordination chemistry at the nanoscale is considered one of the most versatile approaches for the development of new nanostructured materials due to the infinite possibilities endowing unprecedent properties. Specifically, nanoscale coordination polymers (NCPs) provide an added value thanks to their pre-designed nature, increasing the interest for their application in several imaging techniques, including magnetic resonance imaging, optical imaging and radioimaging, among others.

Just after a brief break, we had the poster contest flash talks. We had people participating from IQS, IBEC, ICMAB, UAB and IDIBAPS research centers. The winner was Lidia Ballel, a pre-doctoral researcher from NANOMOL. 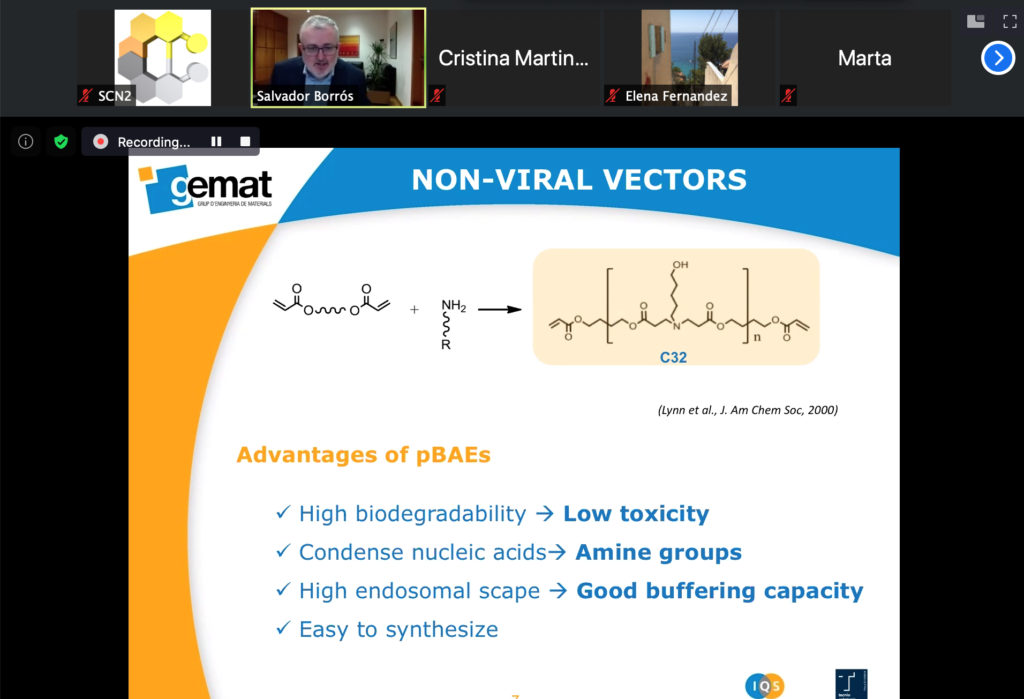 The congress continued with Dr. Salvador Borrós Gómez’s participation. The head of Materials Engineering group (GEMAT) and the general director of IQS-URL, exposed the cationic polymers as promising delivery systems for RNAi due to their ease of manipulation, scale-up conditions and transfection efficiency. In his work, different modifications in poly(beta-amino ester) (pBAE) structure have been explored to overcome stability and target limitations. The optimization of pBAE polymers present great potential as delivery vectors to specifically drive therapeutic RNA-based nucleic acids in a cell-specific manner under physiological conditions.

The following speaker was Dr. Ana B. Caballero. She leads the team Nano in the nanoBIC group at the University of Barcelona (UB). Her current interests include the development of anti-Alzheimer and anti-cancer agents, and the elucidation of the role of materials in amyloid-related toxicity. She is also involved in investigations on DNA-metal complex interactions.

Afterwards, Dr. Marta Pérez, researcher in Cancer Cell Biology group in Bellvitge (UB), showed us her work in developing a new drug delivery system based on robust polyurea/polyurethane nanocapsules. These nanocapsules present amphoteric characteristics that facilitate their accumulation into acidic tissues, such as the tumor microenvironment, presenting selectivity for tumor cells. In addition to this work, these nanocarriers are synthesized through an industrially scalable method. 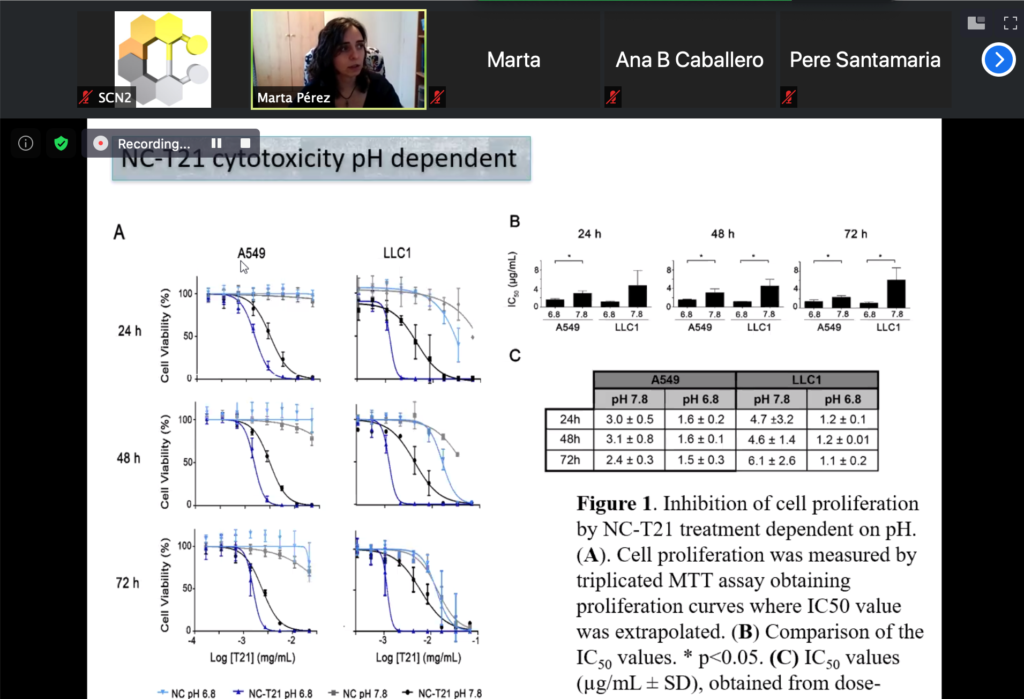 Last but not least, the head of the IDIBAPS group “Pathogenesis and treatment of autoimmunity” and professor of immunology and infectious diseases at the Faculty of Medicine of the University of Calgary, Dr. Pere Santamaria, presented us his work: “Peptide-Major Histocompatibility Complex-based nanomedicines for the treatment of autoimmune disease: engineering, mechanisms, diseases”.

To sum up some of the concepts talked during that day we started the round table debate focused on the “Nanotechnology in the medicine of the future”. We made a Kahoot for the audience to participate, and the answers where commented with the speakers of the table.